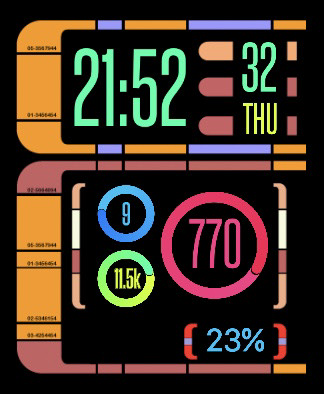 I was inspired by Star Trek to create an Apple watch face using the Clockology App. Here we have a Star Trek computer remake for a watch face.

The LCARS graphical user interface was designed by scenic art supervisor and technical consultant Michael Okuda. The original design concept was influenced by a request from Gene Roddenberry that the instrument panels not have a great deal of activity on them.[2] This minimalized look was designed to give a sense that the technology was much more advanced than in the original Star Trek.[2] The early display panels were made out of colored plexiglas with light behind them, a technique that can produce complex-looking displays cheaply. At times, pieces of green material were used on control panels so that complex animations could be added in post-production via the chroma key process.

As the show progressed, use of animations increased. Most were displayed on video equipment built into the sets. Depending on the camera angle, the animated LCARS graphic might appear curved due to the use of cathode-ray tube (CRT) screens. As flat-panel display technology became available, set design moved away from the CRT displays, giving the animated LCARS graphics a closer appearance to the static graphics.

On Star Trek: The Next Generation, many of the buttons were labeled with the initials of members of the production crew and were referred to as “Okudagrams.”[1]

When Michael Okuda was asked about the design of the LCARS display, he responded “I came up with the LCARS style in part because of Gene Roddenberry’s directive that he wanted his new Enterprise to be so advanced that it looked simple and clean. The other part of the LCARS style was that it had to be something that could be manufactured quickly and easily on a television budget.” – Wikipedia