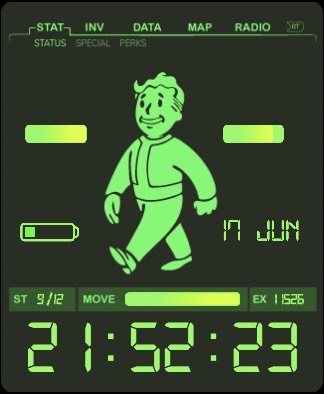 I was inspired by Fallout to create an Apple watch face using the Clockology App. Here we have Fallout Pipboy remake for a watch face.

About The Pip Boy

The Pip-Boy is a fictional wearable computer in the post-apocalyptic Fallout video game franchise. Manufactured in-universe by RobCo Industries prior to the devastating nuclear Great War, it is capable of numerous functions depending on the model. In the Fallout games, it functions as a diegetic way for the player to access the menu and manage their inventory.

The Pip-Boy has been called one of the most iconic tools of Fallout and video games as a whole, and praised for its design, as well as compared with real-world wearable computers. Many working replicas of the Pip-Boy have been built by fans of the series, and Bethesda, developers of Fallout 3, 4 and 76, has released a Pip-Boy replica alongside editions of Fallout 4 that can be used alongside a phone app, in limited quantities. And a D.I.Y. Pip-Boy replica as a package sold separately from Fallout 76. – Wikipedia