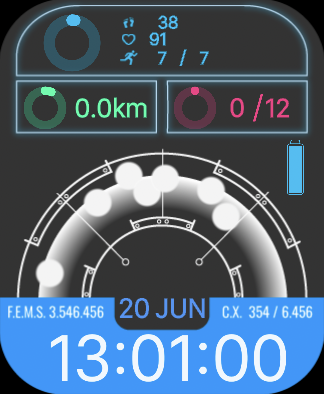 Apple watch face using the Clockology App. Here we have a Alien Tracker remake for a watch face.

In June 2122, 2 of the devices were constructed by Ash for use by the crew of the USCSS Nostromo in their efforts to find and kill the fully grown Alien (which the crew believed to still be a Chestburster). After the crew discovered the size of the creature when Samuel Brett was killed by it, Arthur Dallas came up with a plan to flush the Alien from the Nostromo‘s ventilation shafts and into the ship’s main airlock so that it could be expelled into space, while Ash and Joan Lambert tracked its position with the tracking devices.

After the plan failed when Dallas was killed, the devices were left in the Nostromo‘s mess hall and were ultimately destroyed when the ship’s self destruct system, activated by Ellen Ripley, detonated. – AVP Fandom